In the first blog I pointed to the JSF and reasoned that I don’t believe the positive quote ‘Now it is our decade’. In the second part I tried to look into the plans which where shown in an article.

With this third blog I will write something about the problems (which I already talked about in a previous blog) the delusional High technological – high cost (mostly poor quality (you won’t believe it) but high budget and high results for shareholders of the MIC) part which is meant for intervention, stand-off ranges… in short best described as the Joint Strike Fighter concept. In this blog I will focus on the implications for the RNLN. In order to do this I will point out that the Navy has good quality ships(units) but in to small numbers.

Concessions not capabilities
People who have read my blog know that I’m not a fan of the OPV (Holland class) and JSS (karel Doorman class). And that’s because I believe that these were more political and industrial oriented concession projects. First of all, I believe that we should have kept the incredible robust MP frigates as they where. The ministry of Defense (while it should be a political decision) used this argument that they where to costly with big manning costs.. but these costs – on the total cost of sailing a (big) vessel are peanuts. And that’s the same for an OPV or a frigate. The MP Frigates could sail with a smaller crew of about 80 people on “coast guard missions” instead of about 150 people in full war configuration> This ability is lost with the great OPV’s.

The OPV’s are solutions for tasks and have a performance profile that could have easily been done by less costly ships. They are classes of ships full of concessions. I said it many times before. The Dutch (and you can fill in most of the NATO member countries except US but included the UK) have created a split in two parts of Defense:  the High technological – high cost (mostly poor quality but high budget and high results for shareholders of the MIC) part which is meant for intervention, stand-off ranges… in short best described as the Joint Strike Fighter concept….and the second part is the “good for peace & security operations” forces.. called UN peace keepers… they (the soldiers believing in these concepts) imagine to be capable of warfighting… for the public and the politicians.. but they can’t… Why because they depend on the ideal (calculated) scenario’s if everything goes as planned…. Neglecting Murphy”s law.  Just read my last blog and the quote of Brigadier Simon Humphrey (British Army/UK)

“Brigadier Simon Humphrey said budget cuts and an over-emphasis on low-end insurgency operations have left Nato forces at risk of being “overwhelmed in the early stages of a high-intensity conflict”.
….
He added that the continued reliance on close air support – a capability that kept ground troops safe in Afghanistan and Iraq – was a “flawed assumption” for future campaigns.

An accompanying video presentation declared that “Nato’s rocket and gun platforms are outnumbered, outranged and outgunned by all their likely peer adversaries. The enemy would overwhelm our forces with greater range, volume and access to large-calibre munitions.

“A rocket engagement with a mix of sensor fuzed, thermobaric and proximity munitions against dispersed Nato battle groups would be devastating.” ”

Remember what is really wrong with the Dutch armed forces:

What I mean is that the Dutch armed forces – especially the land forces lack offensive capability and depend completely on others and “Airpower” which is an illusion. But also the Royal Netherlands navy lacks capabilities..

I am aware that it isn’t the same “problem” as the Army has which has a complete lack of offensive weapon systems.. No the Netherlands navy indeed has capable frigates, it’s Submarines are very good: unmatched in capabilities and quality, they form a special class on their own, since most of the other submarines are much smaller and the Walrus class ships are capable of transiting much greater distances on their own without any help. The current class of Mine Counter Measure (MCM) ships are also very good. The problem with the navy is especially that the force mix is to small to have enough ships available for the “four stroke” which is needed to be able to train for the worst… that’s what our fighting forces are for. Units need to be able to do peacekeeping (and other secondary role) missions, but also train for worst case scenario’s and that’s the point, there are to few ships, and to low on crews to do that. This in combination with the policies of the governments since 2008 have been disastrous for all branches (even the Air Force with their continued focus on ALL AMERICAN (in)doctrine, equipment and their fight on (terror and money for the MIC).  There used to be a capability mix of different kind of systems which together formed a system of systems… It was called a layered defense. That’s all gone now. We have just one layer with offensive capabilities and some disguised / fake layers without any capacities what so ever. Back to the Navy, we came from a force structure with lots of fighting ships – support vessels – Mine Counter measure vessels – integrated Marine units – maritime patrol aircraft – naval helicopters… a complete and cooperative layered team effort.

In a blog from a couple of years ago (2014) I reflected on the Dutch navy situation compared with 2004 >  Focusing on the key area of Anti Submarine Warfare (ASW).

The last couple of years… well almost 10 to 20 years, many European governments, like the Dutch government seem to have forgotten why we need a well-equipped war fighting capable navy. A new trend have arose where full fletched destroyers, frigate’s and corvettes have been replaced by so called Ocean capable  (a term also used: Offshore) Patrol Vessels. These vessels are mostly capable of operating in a coastguard role, with some weaponry and sensors and often helicopter facilities.  One of the main area’s which this “rebalancing” of fleets have led to is a large diminish of Anti-Submarine warfare capabilities. The European navies decreased the number of submarines, submarine hunting vessels, Anti-Submarine Maritime Patrol Aircraft and Helicopters capable of these important tasks.  Besides that navies tend to invest less in training hours for these kind of operations. Why? The threat of the Soviet fleets have disappeared right? To give you an example: The Dutch Navy in 2004 (ten years ago) had: 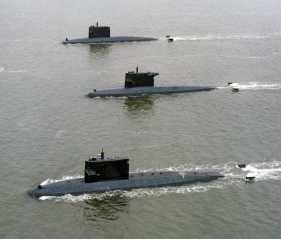 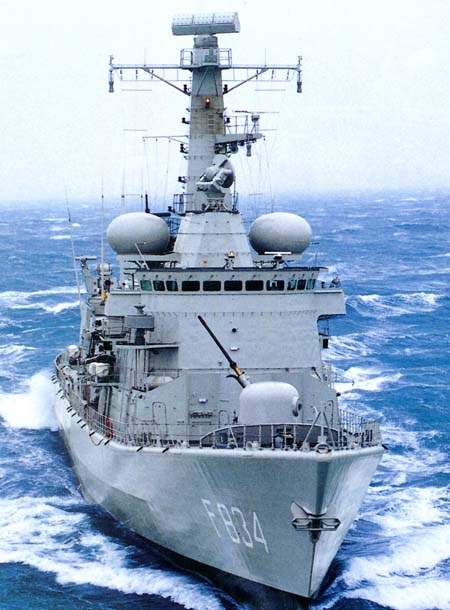 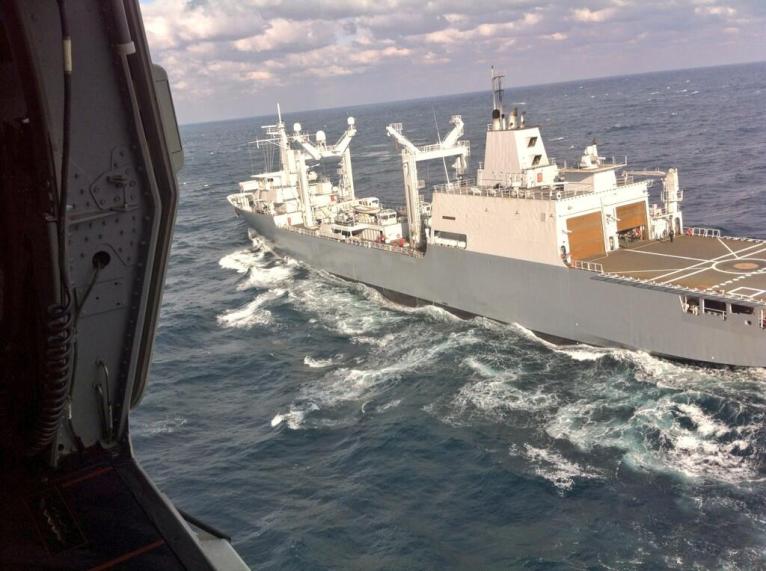 Truly needed, replenishment ships at work… to delvier reach to the RNLN.

If we look at the current status of the Dutch Navy… don’t fall of your chairJ I start with the actual decrease/increase (if there is any) by – xx! or + xx!

Timmermans (Labour), “Yes, but it’s not the answer I want to hear I want to hear that there were no life-sustaining investments would be done in the submarine service.”. When (minister of Defence) Kamp stuck to his point, the parliamentarian Timmermans decided to break with: “Then this decision wil be the nose of the camel and I predict that we will never get rid of the submarine service.”

The Dutch submarine service has lost a lot of “fat from the bones”… it’s a very tiny service with very few personnel. But the effects it can generate is very interesting. They do a far more better job than the Canadians, Australians and many other countries operating the same or more ships with a lot more personnel. All those other services deliver fewer hours at sea at larger cost.

We can say that the RNLN now has a half replenishment ship. A half ship because the Netherlands has a Joint Support Ship, it also has to be used for transport tasks, It can be used as a marines landing ship besides this the Netherlands has to share this ship for several days/hours per year with the German navy.  But as I suggested before there seem to be plans now for a dedicated “simple” Combat Support ship…like the LOGISTIC SUPPORT VESSEL REPLENISHER 20000 off-the-shelf…. So Navy / MoD please buy a “simple” ship and don’t try to develop it yourself…. Other surface ships are still the same at the moment. 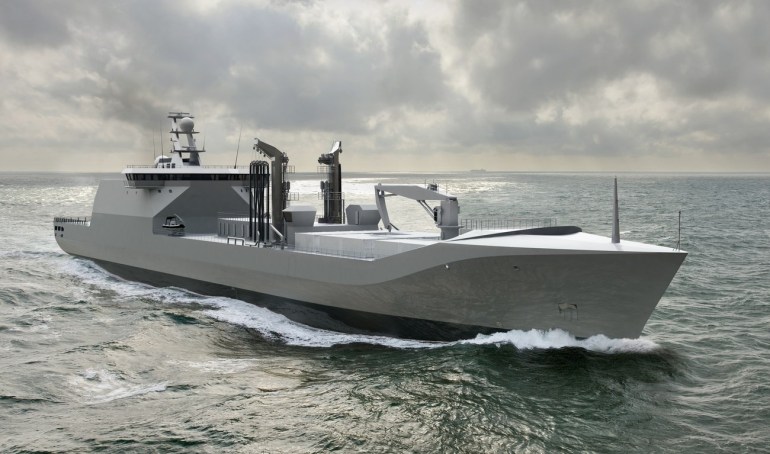 Yes I didn’t mention the Ocean Going Patrol Vessels… we have 4 of them, and they are being sold to the politicians and to the public as a great success. I don’t agree. I didn’t mention these ships because I was talking about ships with ASW capability. And there you’ll have it.  This is what I think about these ships – which to be honest – look beautiful and decent.

My critical views on the OPV short sum-up:

That’s it for now, stay tuned!

Watching Defensie is my business

A Report by the APPG on International Religious Freedom

News and Opinions From Inside China

Turtle Bay and Beyond - International Law, Policy, and Institutions

UK Defence Issues and the odd container or two